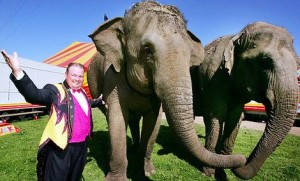 In a wonderfully warm story that broke out over the weekend, the RIA reported that two circus elephants drank vodka to help them survive when their trailer caught fire in the freezing Russian winter. To make matters worse, the elephants were in Siberia, en route to a show in the town of Omsk.

In an effort to save the elephants from freezing to death as they were waiting for a new truck to bring them to a heated local school gymnasium, One of the elephant handlers resorted to the traditional Russian cure for all ills; By buying two cases of vodka from a nearby village, diluting it with warm water and serving it to Indian elephants.

“After that they roared as if they were in the jungle! Apparently they were happy,” he said.

Jenny and Magda, the two elephants in question, ended up with little more than frostbite on their ears and trunks once they were delivered to the warmth of the school gymnasium. One would think the elephants would have been seeing pink elephants themselves, but according to the veterinarian who inspected them, they were sober.

Mental Note: don’t ever go into a drinking competition with an elephant.

The two elephants later reached their final destination in the Siberian city of Omsk on Friday and began rehearsing for their circus performances over Christmas and the New Year.