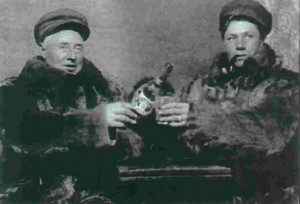 Vodka and Russia are pretty much inseperable entities in the minds of most people. While it’s still debatable whether Russia was the birthplace of vodka, there’s no doubt it’s the one country most closely related with the wonderful drink.

It’s a sad fact then that most people (unless you happen to be Russian, in which case – Za zdorovje!) have no idea how to actually drink it in a proper Russian way. Today’s, Vodka is seen more as a mixer or as a shooter, rather than a drink to enjoy on it’s own, especially with friends and family.

So here’s a little tutorial for you, for those who wish to experience vodka the “Russian” way – on how to get things done.

Make sure you select a vodka that is made in Russia. You need RUSSIAN vodka. No other vodka will do. You want to drink like a Russian, the first step is to drink the same stuff Russian people drink. Vodka is a proud tradition in Russia. Drinking non-Russian vodka would be like drinking Bourbon in Scotland. It just doesn’t happen.

You need a larger shot glass than normal. Russian vodka glasses hold about 2 to 3 shots of vodka easily, so find yourself something similar.

Have some “zakuskis” readily available. Zakuskis are snacks you ‘zakusyvayesh’ with after taking a shot of vodka. They are very important to neutralize alcohol, which is why they all contain two important alcohol neutralizers – acid and salt.If you want to go proper Russian, then pickles are generally the most common zakuski you’ll find, although herring, caviar, marinated tomatoes, sardines, or shproty (small smoked sprats in olive oil) all work great too.

To note, one reason why pickles are great is because pickle juice helps you stave off a hangover – so don’t throw away that brine!

Before taking the shot, take a deep breath and exhale, and then shoot the vodka in one go as you inhale. Don’t leave a single drop! It’s considered rude.

5) Hold your breath, eat your zakuski!

After the shot, hold your breath, take a forkful of your zakuskis, and eat it.