Could you tell the difference between a Russian and non-Russian vodka simply by taste?

That’s what we set to find out last Wednesday at the very first Vodka Valley tasting event. Most true-born Russian’s claim that Russian vodka is the ONLY vodka worth drinking. But is it something that you could really tell by taste alone? What, if any, distinction does Russian vodka have over other, non-Russian variations?

We assembled a quartet of vodkas to find out. To keep things more or less scientific, we kept all of them grain based, and our tasters went in blind, not knowing the brands of vodka they would be drinking. 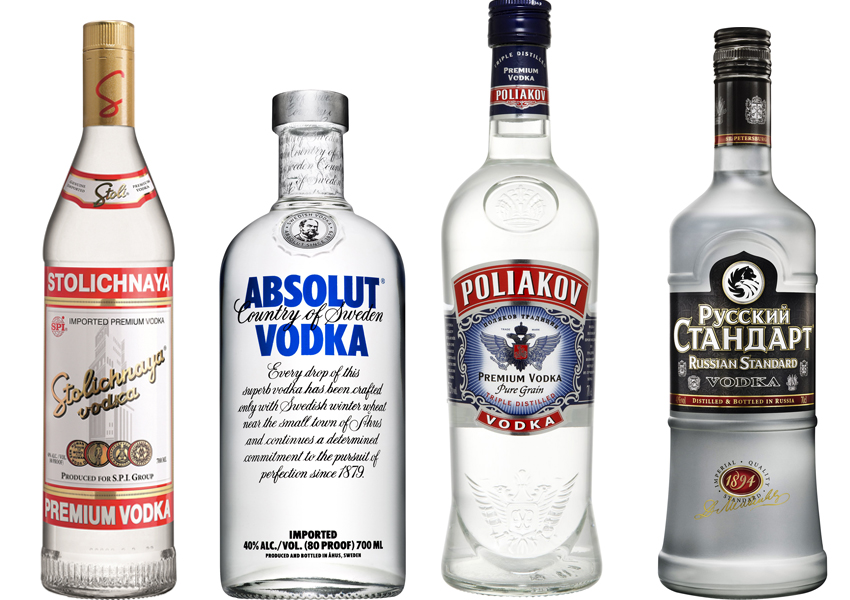 Yup, it’s easy to spot the odd one out above. And before any of you start throwing tantrums that Poliakov is actually bottled in France, we should keep in mind that it is indeed, made with a traditional Russian recipe. (It’s also because we couldn’t find any other Russian vodka in time, so it had to do!)

We had a two-step testing process. The sip, and the down:

Of course, as we were testing RUSSIAN vodka, we had to drink  as a Russian would do – with Russian style shot glasses (i.e. larger) and plenty of zakuskis!

Of all the vodkas, Stolichnaya probably has the boldest and harshest taste to it. From it’s scent alone, it has a strong alcohol, grainy smell mixed with a strong amount of citrus. There’s a nice, creamy texture to it and a strong bite, with a harshness to the tongue. The taste does not linger very long after it goes down, and there is a hint of citrus throughout the entire experience.

The harshness does not necessarily indicate this is a bad vodka, but it certainly was the one with the biggest kick to it. Stolichnaya’s strong flavors makes it a good choice for anyone looking to really “taste” vodka, and would work very well as a mixer in just about every conceivable cocktail.

Here was our black sheep of the bunch. Would we be able to figure out that this was the infiltrator of the four? To be fair, we quite liked this one. Very neutral on the nose. Dry, very smooth on the palate, just a touch of harshness on the tongue, with a hint of sweet liquorice and a short finish.

Absolut is probably one of the most popular brands of vodka in the world and it’s easy to see why after our tasting. It was by far one of the easiest to go down and one with very subtle flavors that help bring out it’s character.

We weren’t too familiar with this one, but were very pleased by what it offered. By far this was the cleanest, ‘purest’ tasting vodka we tried. A very intense smell of alcohol with a hint of floral sweetness to it. Very neutral on the palette, hardly any harshness, with a honey-like sweetness on the finish. This vodka is absolutely delicious and very reasonably priced. Probably best served chilled and as a shooter.

The final of the four proved to be another hit, probably (likely) living up to it’s name in all aspects. Hints of minerals and citrus on the nose, while on the palette an moderate harshness is combined with a subtle citrus flavor. Goes down clean and leaves no aftertaste.

Overall, by the time we got through all four, some of us were happily intoxicated – but we endeavored to try and pinpoint the non-Russian of the bunch. The results were, in a slight surprise, all over the place. None were able to correctly identify Absolut as being the odd one out. One issue was that most taster’s expected the WORST tasting vodka to be the non-Russian, leading many to point towards Stolichnaya as the non-Russian, as it had the harshest palette of all four.

To that end, we can conclude that unless one is a vodka conneussier, there is little chance that a vodka being of Russian origin has any real distinctive characteristic on the taste that would make it stand out from the rest. If anything this proves to us that vodka brands, in many ways, are distinct and each have their own flavors to celebrate – much like whiskey, rum, wine, and other liqueors. Perhaps at most, we can say that there is a certain standard which Russian vodkas adhere to – indeed, a vodka from Russia is more likely to taste better than something made from the Philippines, after all. I doubt anyone could ever go wrong with a vodka from Russia, but don’t feel that it’s necessarily a superior product – because it might just not be.

Zazdarovje, happy holidays and see you guys next year!