The Long Island Ice Tea, contrary to some belief, does not contain any tea in it whatsoever. What it is is a potent mix of clear alcohol that, when made just right, so happens to taste like ice tea. Created in the 1970’s in the famous Oak Beach Inn in Long Island, the drink was created in response to a competition that required cocktails to contain triple sec. The drink, originally dubbed a “Rosebud” became so popular it quickly lost it’s original name and hence became the Long Island Ice Tea we know today.

The drink is deceptive. It looks like ice tea, and in some respects tastes like ice tea, but wow is it a real kick in the face (in a good way, it’s delicious.) Make sure you aren’t designated driver for the evening if your having one of these.

To be fair, the drink isn’t particularly vodka based, but we like it, and it has vodka in it, so there! 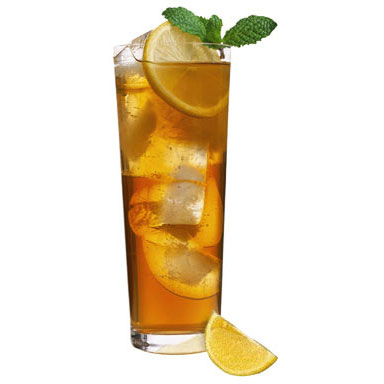 Fill a mixing glass with ice. Combine all clear spirits and the sour mix inside and shake to mix. Fill a tall Collins glass with ice and pour the mixture in. Top off with a spritz of Cola and garnish with a lemon or lime slice.